Get fresh music recommendations delivered to your inbox every Friday.
We've updated our Terms of Use. You can review the changes here.

We Suck! The Lost Album (AKA You've Ruined Everything) 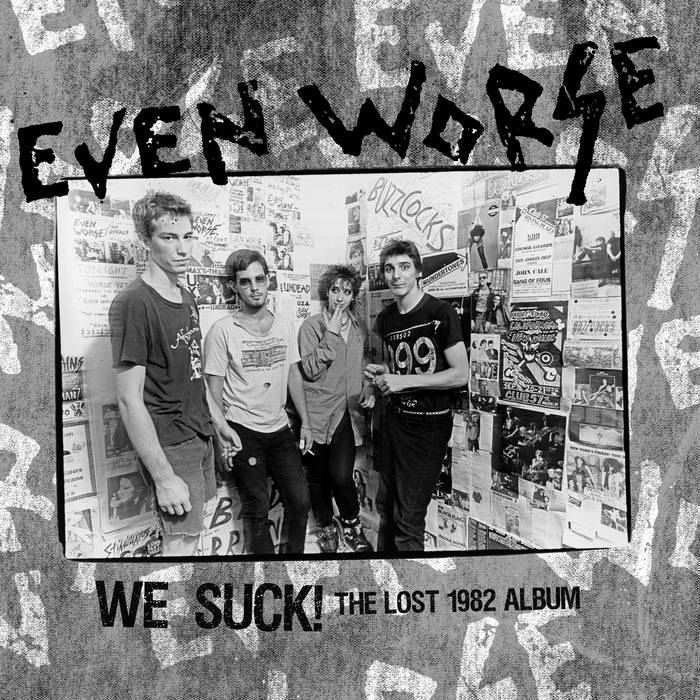 Album notes, short form: Looking back now, we loved playing those myriad 1980-1982 New York punk rock nights with our friends Bad Brains, Heart Attack, The Undead, Kraut, False Prophets, Reagan Youth, etc. We went to their gigs; they came to ours - my overriding definition of a "scene". Everyone helped each other. Together with the unique audience characters (like Mouth of the Rat publisher Dave Parsons and Cathy, 171A sound-meisters Jerry Williams and Scott Jarvis, and crowd regulars), we got there early and stayed late, talking 'til we were hoarse. Who wouldn't be inspired by the frenetic energy of so many young bands and people with something to say, bonding? It was a nightly party; adrenaline mixed with spirited humor, everyday outlandish behavior, and vertical dancing.

Why had no band from our scene made an LP? New York punk bands had to use the money made working to pay for rent, food, sundries, equipment, and rehearsal time. Unlike D.C. bands, for example, we weren't living at home or practicing in our parents' basements anymore. That's why New York never had a Dischord, X-Claim, Ruthless, BYO, or Touch and Go. Not to say it wasn't discussed - it was, at length, everyone was just too skint. This was 35 years ago, indie labels were still scarce, and no label had any interest in our scene outside of the late Neil Cooper at ROIR (then cassette-only); and very few underground bands released LPs - not even Stimulators, The Mad, or Bad Brains had. Compounding matters, the hardest older CBGB bands were considered "commercial failures" for Sire, Arista, Chrysalis, and Elektra.

After well over three decades, this "Lost LP" shows what we were about outside of the two prominent scene compilations we appeared on, NY Thrash and You Can't Argue With Sucksess (named for our live recording from Max's also heard here, "We Suck"). It was supposed to come out in the spring of '82, but with no one to release it and amidst internal dissension (happily resolved in a few years!), we imploded brilliantly instead. R.B., Robert, and Eric left, to make some great music, first together, and over the years with many other groups such as King Missile, Missing Foundation, Pussy Galore, Sloth, and the Wharton Tiers Ensemble (R.B.), Spineless Yesmen (Eric), and Drizzle, Woozy, and Chia Pet (Robert), while I continued on with a new Even Worse lineup for two more years (including Sonic Youth's Thurston Moore and Noise the Show's/Hugo Largo's Timmy Sommer and releasing two singles), but that's another story. (Likewise, our initial 1980 lineup—with eventual Beastie Boys founder John Berry on vocals, R.I.P, and beloved friends Dave Stein, R.I.P., and Nick Marden, long may he live—never entered a recording studio). After that, I toured with L.A.’s Leaving Trains before forming Springhouse and eventually, Last Burning Embers, releasing real-time LPs and touring some more.

Time marches on. But on this album we hoped to capture the positive spirit, enthusiasm and zeal of that time, the City, our live shows, and the good fun we had playing (and living) together back then. And indeed, I/you can really hear the special energy of 171A's comfy environs; and the legendary Max's Kansas City club's truly alive atmosphere is audible here, too, on this magical August 1981 night, as it was on Johnny Thunders' Heartbreakers' live LP there! (There's a similar mixing desk/audio vibe.)
Lastly, I still get excited when I hear our music on the radio, like a door re-opening on a pleasant memory, and R.B., Robert, Eric, and I are all still friends and all keep in touch. It’s always great to think our music survives as does our personal bond!

Thanks to everyone helped our band and came to see us (including this lineup's 2002 reunions shows at CBGB with our old friends, what a gas!), worked on these recordings (kudos co-producers Bad Brains and Jerry Williams, R.I.P.—thanks Jerry, for preserving these tapes on your own for 20 years—Peter Crowley at Max’s, and Brian at GTA) and/or all the people that made those nights such an outrageous hoot! Enjoy!

(NOTE: for a much longer version of these notes—like a short-story guide to the band and that scene's era—plus vintage photos, press clips, etc., please see evenworse.com!)

This is our only album.

Bandcamp Daily  your guide to the world of Bandcamp

Alex Rita and Errol from Touching Bass feature in our special London edition of the Bandcamp Weekly.